Why I Don't Want To Be A Verizon Customer Anymore

So, my Samsung Galaxy S3 Mini has had problems since I bought it back in August. I don't know whether it's a horrible phone, or whether I bought a defective one, or, hell, whether I used it wrong and made it bad. (Verizon has an opinion on which of those three it is, I can tell you.)

But they were relatively minor problems, and I wrote them off -- after all, I chose the cheaper phone, and you get what you pay for, right?

So, when it started freezing almost every time I played Words With Friends, I just played WWF less often, and eventually quit altogether. When it froze and told me that 'unfortunately, messaging [had] stopped' I shut it and tried again. When it repeatedly told me (like 8 times a day) it was sorry that VZWAVS Service had stopped, I told it okay, and went on.

On Tuesday night, though (for reference it is currently Friday), it started a new game.

It said it couldn't detect a SIM card, and that it would need to restart. Okay, no prob, restart.

It did, and I noted the battery was low, so I went to plug it in. It informed me that using the wrong charger was dangerous to my device, and that, accordingly, charging had been stopped for my protection. I should please only use the charger included with my device.

This was something of a surprise, since I was using the charger that came in the box with my phone.

Okay, so I cross the room and plug in to Justin's charger. Nothing. It doesn't start charging, it doesn't talk to me about wrong chargers. After a moment, it tells me there's no SIM card.

Huh. My SIM card must be loose or something. I open the phone, take it out, look at the contact points, see no problems, put it back in. Put the battery back in, turn on the phone, and plug it in -- in the kitchen, with a Kindle charger. It charges.

In the morning (now Wednesday) I pick it up. Unfortunately, it says there's no SIM card, and my device will now restart to look for one.

Throughout the day, I google. Someone had this problem and cleaning the contact points with alcohol helped. We have no alcohol in the house, so I'm not trying that one. Someone had it and Verizon replaced their SIM card five times, and it still doesn't work. They finally had to replace the device. Someone had the same problem and their SIM card was loose - a small piece of paper tucked next to it fixed it. Someone else fixed it by blowing it out like an old Nintendo cartridge.

I tried blowing, and I tried a piece of paper. No go.

Wednesday afternoon, I needed to text Justin. I restarted the phone and sent a text. The phone announced that it had no SIM card, and that the message could not be sent. He responded to it, though, so it must've been sent.

When he got home and I had access to his phone, I called Verizon.

I said, "I thought you were tech support."
"Yeah, but we have tiers, so maybe a higher level than me can help you."

(Shouldn't that have been suggested BEFORE the pay-up option?)

So this guy says he'll send me a new SIM card, also that it isn't a insurance issue at all, it would be a warranty issue -- so if a new SIM card doesn't fix it, it can be replaced for free. But actually, he would rather -- instead of him sending me a new SIM, why don't I go into a store. It'll be the same thing but faster.

On Thursday, we have a water pipe bust. Unrelated, and we used Cay's phone to contact someone, but it just ticks me off that at that point, I'm paying for a phone I can't use, when I NEED it.

Also on Thursday, I remember there's another SIM card in a box in the cabinet -- because I got a new phone (not this one, an insurance replacement before it) a while back and swapped my old card into it, not realizing it had come with one. I decide to try it.

My phone is really really sorry that it can't find a SIM card, and will not be restarting to look for one.

Today, I decide we'll go to the aquarium, because I'm going to lose my mind if I listen to another minute of mindless television, and apparently when I wasn't looking a law got passed that the noisy idiot box has to be on 24-7.

So, we head out....and I remember there's a Verizon in KDH now. I'd forgotten. It's in the old Taco Bell building. You know what? Let's go there instead. Luckily, through sheer force of habit, my phone is in my pocket.

I explain my SIM problem. They wonder if the device is okay other than that. Well, no, now that you ask, actually I've had problems with it since I got it. What are they? Blah blah, freezing, service has quit, etc. Okay!

She tries a different SIM card. It doesn't work. Still says it can't detect a SIM.

She ends up CALLING TECH SUPPORT. Where she learns that the Google + app actually causes that VZWAV Service popup for a bunch of people, and I need to uninstall updates and also never let it update again. Here, she'll fix it for me. Now it won't update unless I give it permission.

Okay, great, so the SIM card....well, the wrong IMEI number is in the system. Here, she'll copy the one from the phone. Gosh, it's so hard to read, and looks peeled off.

I'm not sure what she's trying to insinuate here. She calls someone else over to read it for her. They pick at the corners and tell me it has peeled off.

For the record, I'm looking at it as I type this, and it isn't peeled and is clear as day to read. In the image below, I've covered a large portion of the numbers with a torn paper scrap, because I'm not clear on which, if any, of the numbers are proprietary or private in any way, but left enough you can see the numbers are readable, and that the corners aren't peeled at all. (The greenish corner isn't peeled; it's actually a greenish black color. Unfortunately these are taken with my Kindle because my camera is dead, so they're not as clear as they might be.) 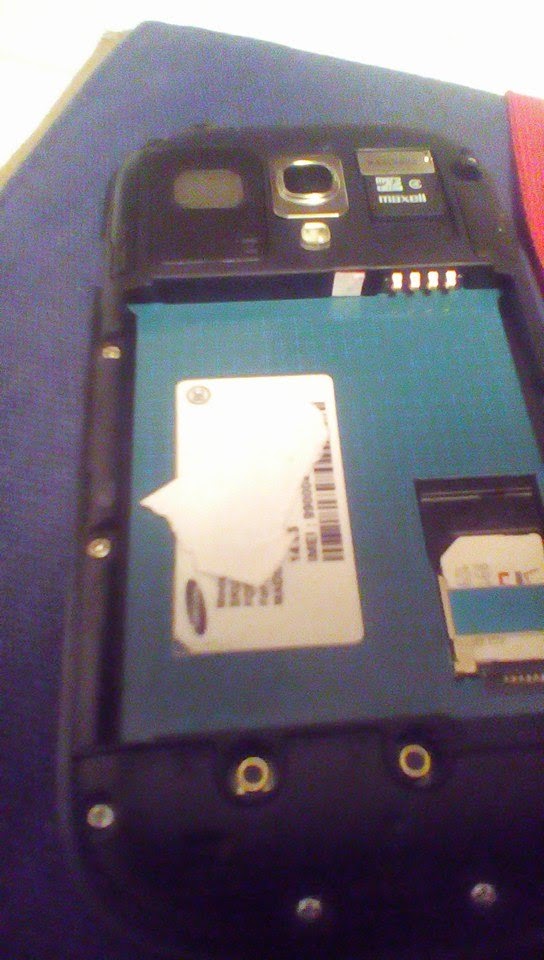 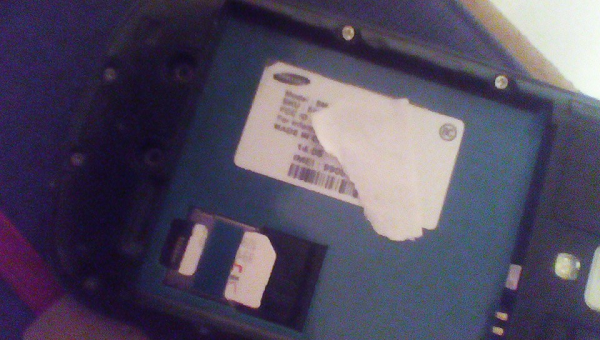 After some struggle, she gets the number changed in the computer. Look! Now it works! It's even faster than it was before!

Oh! She sees the problem! It's the water damage!

Yeah, but you know, I mean, that can just happen, like, see these strips? They should look like this. She shows me the moisture sensors in my phone and hers. Hers are covered with pink x's. Mine are not. But see, she explains, even if you, like, use it in the kitchen while you're cooking, like if there's steam in the air, that can do that.

I said, "So wait, you're telling me my warranty gets voided if I basically use my phone in the kitchen?"

Well yeah, yeah, it can.

I respond. "No. The device has not been submerged."

"Yeah, cause you can tell when it's been submerged. Those pink x's are completely gone."

Look, we all know the moisture strips are a scam. Phone reps have admitted on the internet that they can go blank from being in your pocket while you work. It's bullshit. And I know this.

They are obviously making up guesses, trying to be helpful.

But she goes, "Ohhhh, is someone making up stories? That's oddly specific."

Excuse the hell out of me? Their very diverse guesses are oddly specific? I know when I left, they said something like, "She tried to claim it wasn't submerged, but her kids told on her! Haha!"

But it was NOT! These were guesses! They made up half a dozen different things that could have happened!

There are a number of other little comments like this throughout, about the water damage, and how you just have to keep them out of the bathroom and kitchen, hahaha, and if they fall in the water, you know, that's the warranty. Understand that these nasty snipes are interspersed between comments about how beautiful my baby's big eyes are, and how well-behaved my big kids are, and similar.

So, she hands the phone to me. All fixed! I open it to take a picture of Harmony, who has been drawing with chalk and has it all over her face.

My phone is sorry it will have to restart now, because it cannot detect a SIM card.

I show the lady. Oh gosh, well, that'll all be fixed when my new one comes in the mail on Monday.

Um, wait, changing the SIM card didn't fix it before, either when you did it here or when I did it at home. Why would it fix it on Monday?

Okay, but clearly the SIM card isn't the problem?

"Well, don't forget, there's the water damage too, so that probably had a part in it."

Two minutes away, I'm so upset I call Verizon to cancel my line. Unfortunately, that'll cost me $160 bucks, so I don't do it. (The guy was very apologetic and did give me a $40 credit, saying maybe it would compensate me some for my time and gas for the wasted trip.)

At this point, though, I have no more use for Verizon or Samsung. This is my second Samsung phone, and the first one had issues too. I have had a very good relationship with Verizon before now. They've been excellent, fixed problems quickly, and generally not been assholes, which is more than I can say for some phone companies I've worked with. (I had an Altell rep lie to me about when my contract was up. I spoke to a different rep, and learned that it was 16 months sooner than she claimed.)

But yeah, I got basically accused of lying, and handed a 'fixed' phone that still doesn't work, and wasted four hours of my life being talked down to and nastied at. And I'm still stuck with a phone that does not work, that I have to pay for for four more months, and that won't be replaced under warranty.
Posted by Unknown at 5:27 PM No comments: