Note: If you live in Columbia, you may know what house I'm talking about. Please be aware that while the house exists, and the story is inspired by a real fear and a real tract and a real childhood belief, the story itself is fiction. As far as I know, there are no witches in Columbia, and all our old ladies, even those from away, are nice people.

Halloween
The Halloween when I was seven years old, I finally understood why I wasn't allowed to trick-or-treat.

Our church gave all of us copies of a Jack Chick tracts about the dangers of Halloween, and I read it quite credulously, and learned that witches were real, not make-believe, as I had previously thought, and were in direct and constant connection with Satan. 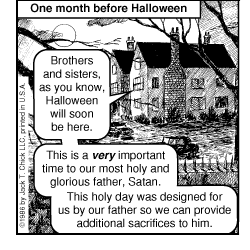 On Halloween, witches used the evil of the night to draw children into their clutches, feeding them apples with glass shard, candy with needles, and, if they were lucky, drawing them into their covens, adding to Satan’s army.

The tract included a picture of the house where some of these witches lived, and in the way of children, who believe their own little lives are the whole world, I understood it to be a house in my town.

After some study, I worked out which house it was. The house didn't look exactly like the one in the tract, but it was close enough for drawings, and naturally, I developed a healthy terror of the house.

I never saw anyone come or go from it, but it must contain witches, because my church had said so, or at least, I’d understood my church to say so.

The house was at the corner of Martha Street and Road Street, and I did not have to pass it in my daily walk from my grandmother’s house to my own home, but I usually did walk that way (unless it was getting dark out) so that I could look at it and shudder in the amount of terror that comes from knowing, on one level, that a scary story is absolutely true, while knowing on another level that it mustn’t be.

There was never anyone there – not that I saw then, anyway.

[Photo Credit: Jack Chick]
Posted by Unknown at 6:13 AM No comments:

I had, for some reason, a series of the creepiest, rapiest dreams ever last night. This morning, they have me angry- not at the anonymous, nonexistent people in them, but at the people they represent, who just don't get it, and keep making rape and sexual assault even scarier than they are on their own.

The first part of the dream involved my husband and I staying at some hotel that we apparently went to every year for some event. Somehow I'd forgotten to pack, and after wearing the same cut-off shorts for a couple of days, had gone to buy new clothes, but could only find a skirt.

I was walking down the stairs, trying to convince myself the skirt was okay, not too short or tight, when some old ladies who were sitting in the motel's lobby got up and came over to me to tell me what and improvement it was- I looked so much nicer, like a lady, they said.

I felt the same discomfort I always do with that kind of suggestion- that I'd look nicer if I chose the 'right' clothing or makeup or something, stuff that the speaker considers more feminine, and not only 'nicer' but like a 'lady,' which is a concept that bothers me on several levels anyway.

But I thanked them politely and uncomfortably and rushed on.

I walked back through the lobby later, and some guy ran past me, grabbed my butt with one hand, and pulled sharply at my shirt, clearly trying to expose me, with the other. And he ran on, so quickly that yelling at him, slapping him, or even identifying him were beyond me as options.

I did the only thing, in fact, that was left to me- straightened myself and kept walking.

The old ladies called out to scold me for my public display, going on to say that they knew I'd been trying to catch that young man's attention when they first saw me in such a short skirt, but that I still should have saved it for behind closed doors.

I went up to my hotel room, where my husband was taking apart blocks- those old barrel shaped ones you get for babies, that link at the end. He said he'd entered a sex-toy designing contest, would I help him come up with some ideas? I thought that sounded funny and interesting, and went to sit at the table and listen to his ideas.

Suddenly there were two other people there- I don't reckon I'll identify them. I'll call them Bob and Dave instead. Bob is several years older than me, and Dave was ambiguously 'older-teen-to-young-adult'.

It was clear they were a part of the project too, and suddenly I was a little less comfortable with talking about what might feel good. Still, they'd apparently been there before I got there, and I sat at the table and started cutting fabric. (I'm not sure what the fabric was for.)

Then suddenly I felt a tug and looked up- Dave was lifting my skirt with his pencil, and leaning under the table, trying to get a peek up it!

I jumped up and screamed.

He was immediately all innocence, and the other two looked confused. I shouted at him, "You lifted my skirt with your pencil!" which made my husband leap up to defend me physically, and the other guy giggle - because, haha, so fucking funny, a girl says Dave has a 'pencil,' teeheehee, he put his 'pencil' in her skirt, ell-oh-fucking-ell.

I shook my head at my husband, and to his credit, he took my cue and let me handle it. I am not sure what I said to Dave, but he rolled his eyes at what I could tell he saw as my ridiculous, silly, probably-hormonal overreaction, and left. I know I didn't tell him to leave, whatever it was I said- he left because he felt like I was being a bitch, with no sense of humor.

The rest of us went back to work, and I was trying to describe to my husband a way the barrel-shaped blocks could have texture, and was talking about rough and smooth. At that, I heard a noise I recognized as a razor running, and thought Bob was shaving his face as a joke, and glanced over to see he was actually shaving his crotch, leaving a stubble- and he shouts over the razor sound, "TEXTURE!!"

At which point I got up and left the room. I wanted to go to bed and my bed was in that room. I wanted to put on jeans and I only had my skirt and cut-offs- and my cut-offs were in that room. I couldn't even walk down the stairs because I was scared of the other guy, or someone like him, showing up, or the old ladies giving more commentary. I had a mental image of going over and talking to them, seeking sympathy, and being told I had asked for the treatment by discussing sex toys with people.

I basically felt trapped in the few feet of space immediately outside my hotel room door, and not even comfortable or safe there.


And that's a lot of what real life is like. I have never been raped. I have been sexually assaulted. I have had inappropriate or uncomfortable comments. I have seen a lot of the kind of verbal attack the old ladies gave.

And all of those are part of the problem.

People like those ladies make reporting a sexual assault harder. Your stupid comments about how certain clothing items are meant to catch attention make victims feel guilty. Your suggestions that a woman looks 'better' or 'more like a lady' in a skirt or makeup or whatever tells her that her identity is bound up in her appearance. Look this way to be this person.

And when your jokes make someone else uncomfortable, they aren't always the problem. Look, maybe you tell that one joke about the genie and the 12 inch Bic and somebody informs you that word is rude and uncouth, and you give a big eyeroll, because, like, omg, lady, we  live in a day where we don't pretend the opposite sex doesn't have body parts! and you retell the story to everyone you know and they all agree that she was a total prude. Hey, maybe she did overreact. Maybe your joke was very mild and perfectly okay. Maybe

But more likely, if you're routinely offending people with your jokes, maybe they aren't funny. Maybe they're invasive, and maybe, maybe you already know that and that's why you tell them, for the sense of power that comes with getting in another person's space just a little bit.

But maybe not- maybe you sincerely don't get it.

If you're that guy, let me explain. Here it is.

You're part of the problem. You, too, are telling a woman that her sexuality, her body, her feelings, are yours first and hers second. You don't think that joke should make her feel unsafe? Okay, don't think it should.

Now take your little balance out of your pocket, and put her feelings on one side and what you think her feelings should be on the other. If your opinions on her feelings are heavier, then you are, at best, being pretty selfish, not a friend, and not funny.

What were the messages in the dream?

The older ladies: "Who you are is defined by how you look. Your worth is defined by how you look and dress."
The running guy: "I can take what I want, and there's nothing you can do about it."
The ladies: "If someone takes something from you, you are the guilty party. Your looks determined what you deserved."
Dave: "If I want something, I should be able to get it. If you don't like that, you're a bitch. You're frigid and have no sense of humor. My wants are for you to satisfy, even if you don't share them."
Bob: "If I hear that you might like a thing, and I have that thing, I can expect that you will provide me with what I want- even without consideration for whether your 'like' equals 'want,' or whether you would want that thing from me specifically, or whether the thing I've got is really the thing you like (shave stubble equals textured toy? Really? Dumbass.) or whether you can get the thing you like from other sources. If you like texture, and I have a texture, you'll give me sex. Simple as that."


You don't belong to you.
Posted by Unknown at 7:32 AM No comments: